Morris and Annie Tennenhouse emigrated from Rumania to England in 1900. After four years in England, the Tennenhouses immigrated to Canada and set up a homestead in Camper, Manitoba. Frank Tennenhouse, the youngest of 11 children, and the author of the manuscript, was born in 1922 in Camper. Shortly after Frank's birth, the family moved to Winnipeg and in 1932 to Stony Mountain. The Tennenhouse family then operated a family farm near Stony Mountain for the next six decades. Frank Tennenhouse worked on the farm and from 1954-1988 was an assistant professor of agricultural engineering at the University of Manitoba. The digitized material from the Tennenhouse Family fonds consists of an unpublished manuscript entitled "Seventy Five Years of Farming in Manitoba: A Collection of Stories of Life on the Farm." Written by Frank Tennenhouse, the manuscript recounts many different aspects of Manitoban farm life from 1911-1988 including rural education in the 20's and 30's, day-to-day farm life, Jewish ethnicity in rural Manitoba, and the language issues facing new immigrants to Manitoba in the first half of the twentieth century. The manuscript incorporates copies of several family photos into its text. 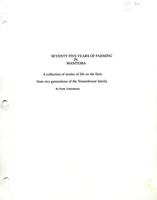 Photocopy of unpublished manuscript, "Seventy Five Years of Farming in Manitoba: A Collection of Stories of Life on the Farm from Two Generations of the Tennenhouse Family," n.d., pg. 1