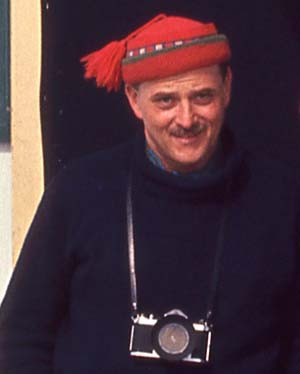 George Swinton was a reknowned authority on Inuit art and the author of numerous articles on the subject. His own art hangs in the National Gallery of Canada, the Vancouver Art Gallery, and the Winnipeg Art Gallery. He studied Economics and Political Science in Vienna from 1936 to 1938 before coming to Canada in 1939. He served five years with the Canadian Intelligence Corps in the Canadian Army, becoming a Canadian citizen in 1944. He completed a Bachelor of Arts at McGill in 1946 and took courses at the Montreal School of Art and Design from 1946 to 1947 and the Art Students' League of New York from 1949 to 1950. Swinton was the Curator of the Saskatoon Art Centre from 1947 to 1949. He was an instructor at Smith College from 1950 to 1953 and Artist-in-Residence at Queen's University from 1953 to 1954. That fall, he joined the faculty of the School of Art at the University of Manitoba, a position that he held for twenty years. From 1974 to 1981, he was a professor of Canadian Studies at Carleton University. His final academic position was an adjunct professorship in the Department of Art History at Carleton University from 1981 to 1985. This digital collection includes material from the Winnipeg Art Gallery Archives as part of the Prairie Prestige project.