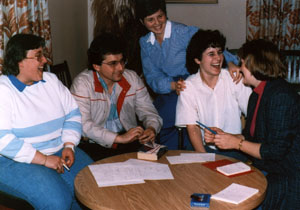 The Sister Servants of Mary Immaculate are an international congregation of Sisters of the Ukrainian Catholic Church (in union with Rome). Founded over a hundred years ago in Western Ukraine, they strive to follow the example of their patroness Mary, the Immaculate Mother of God. They are committed to a communal life of prayer and service of God's people, primarily but not exclusively, those of the Ukrainian Catholic Church. In Canada they have been extensively involved in the educational apostolate from nursery school to the University levels. They have conducted residential and day high schools for young women, including Immaculate Heart Academy and Immaculate Heart School in Winnipeg. At present Sisters teach at Immaculate Heart of Mary School in Winnipeg. Sisters have also organized and directed the Religious Education Centre in the Archeparchy of Winnipeg. The digitized material from the Sister Servants of Mary Immaculate (SSMI) fonds consists of 200 digitized photographs of the Sisters engaged in educational endeavours in Manitoba. The photographs were originally part of the Chronicles created by the SSMI. The Chronicles detail the activities conducted by the SSMI for the Ukrainian Catholic Religious Education Centre from 1977 to 2003. 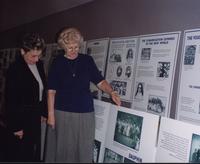 Audience gathered for presentation of Session I of the Jubilee 2000 Adult Faith Enrichment Series co-facilitated by Sr. Carmela Lukey, SSMI, Sandra Dobson, and Olga Twerdun of the UCREC at Holy Family Nursing Home Auditorium in Winnipeg

Catechetical Workshop for new catechists at the UCREC in Winnipeg

Catechist and students in prayer at Holy Family Parish in Winnipeg

Catechists and catechism students of St. Anne Parish in Winnipeg gather with Fr. Walter Klimchuk, seated right, on the occasion of his birthday

Catechists at work during Catechist Formation Session at UCREC

Catechists file into St. Michael's Church in Winnipeg, prior to commissioning on Catechetical Sunday

Catechists participate in commissioning, during Divine Liturgy with Fr. Michael Buyachok, at St. Michael's Church in Winnipeg, on Catechetical Sunday

Catechists with candles during commissioning ceremony performed by Fr. John Kristalovich during Divine Liturgy at Holy Family Church in Winnipeg, on Catechetical Sunday

Celebration during Catechist Coordinators Meeting facilitated by Sr. Carmela Lukey, SSMI at the UCREC in Winnipeg

Celebration of Sacramental Holy Mystery of the Eucharist at St. John the Apostle Church in Winnipeg

Celebration of Sacramental Holy Mystery of the Eucharist at Sts. Vladimir and Olga Cathedral in Winnipeg

Children of Mary with flowers at St. Michael's Church in Winnipeg

Children painting during catechism class at Welcome Home in Winnipeg