Doris Saunders was born in Winnipeg in 1901. In 1917 she graduated from Kelvin High School and then enrolled at the University of Manitoba, where in 1921 she graduated with Gold Medals in both Philosophy and English. Upon graduation, she taught at a rural elementary school before heading to Oxford. After graduating from Oxford with a Diploma of Education in 1923 she taught at both Machray Junior High and Kelvin High School. In 1925, while still teaching, she completed a MA at the University of Manitoba. In 1928, Saunders became the first female appointed to the Department of English at the University of Manitoba and in 1959 became the first female full Professor in the Faculty of Arts. From 1933 to 1945 she was the Dean of Junior Women and was the Registrar of University College from 1964 to 1968, when she retired. Doris Saunders passed away in 2001. The digitized material from the Doris Saunders fonds consists of copies of an address Saunders gave titled "Continuing Education for Women in Canada." 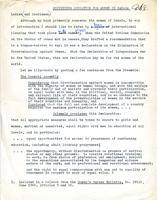 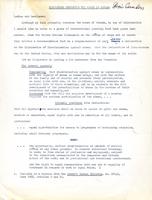 Reply to Toast to the Faculty at Grads' Farewell