John Duncan MacDonald and his wife Anne immigrated to Manitoba from Scotland in 1872. John McIntyre MacDonald was one of their nine children. He married Sarah McMillan and they had three children. John Duncan was the second of three, and he married Margaret Greer. They had four children, the second being Robert James. Robert married Edna Thompson in 1948 and they had four children. John McIntyre homesteaded and over time more land was bought around the original homestead and the land was passed on to descendants. The digitized material from the MacDonald Family fonds consists of John D. MacDonald's pocket diary (1912), which detailed the homesteading experience of this Scottish immigrant, and the family history of the MacDonald's. 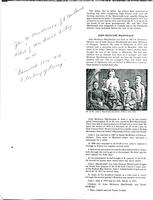