Wenceslaus Hallama settled in Canada in 1891, and purchased land near Grande Pointe from his Uncle Joseph Schwab four years later. He married Barbara Blahnik from Bohemia and they had two children. Wenceslaus was the first farmer in the area to own a seed drill, and a gasoline tractor. In 1938, their only son Joseph took over the farm until 1971. In 1971 his son Edward took over the farm. The digitized material from the Hallama Family fonds consists of photographs, farm account books and a history of the Hallama family and farm. 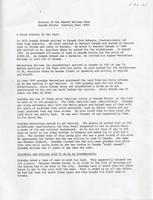 Children and dog in front of the Grande Pointe canning factory