Skapti Arason was born in Iceland in 1850 and in 1874 immigrated to Quebec, with 360 other Icelanders, on a ship operated by the Allen ship lines. After arriving in Quebec, Arason proceeded on to Toronto with the majority of the other Icelanders. In 1875, Arason was sent by the Canadian government to scout out settlement prospects in the new province of Manitoba. It is believed that Arason was one of the first Icelanders to visit Manitoba. Upon arrival in Winnipeg, Arason and three other Icelanders traveled up the Red River and onto the western shore of Lake Winnipeg before choosing to begin a settlement near present day Gimli. In 1881, due to repeated crop failure, Arason left the settlement on the Interlake and resettled on a homestead near what would become the town of Glenboro. Arason farmed in the Glenboro area until his death in 1903. The digitized material from the Skapti Arason fonds includes a copy of a memoir by Skapti Arason, one of the first Icelandic settlers to Manitoba. The seven-page memoir tells of Skapti's immigration to Canada, his subsequent travels to Manitoba, the settling of the Icelandic community on the western shore of Lake Winnipeg and the founding of the town of Glenboro. 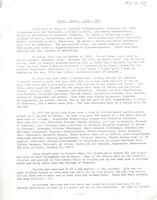